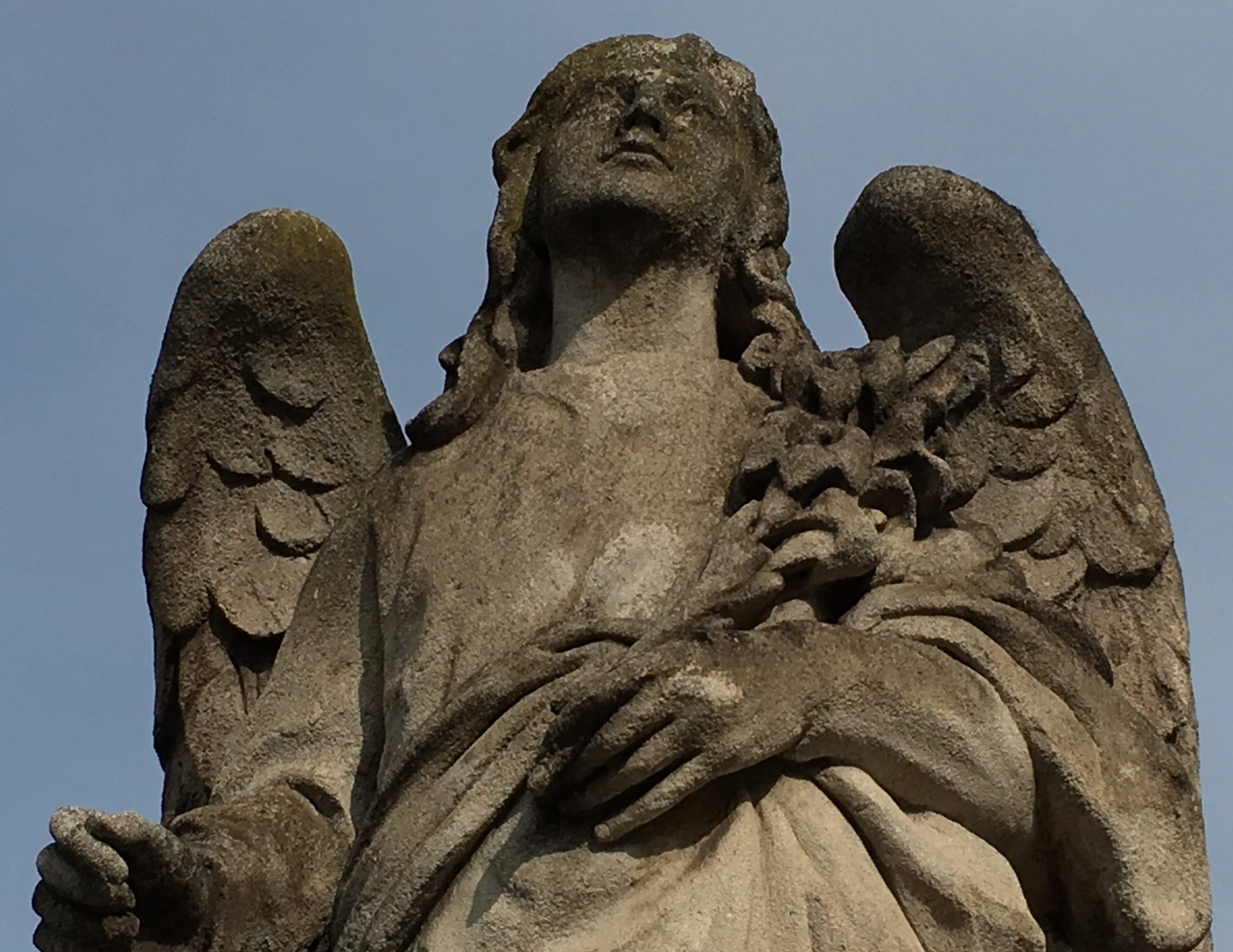 „Ainhoa Elizasu was the second victim of the basajaun, although the press was yet to coin that name for it. That came later, when it emerged that animal hairs, scraps of skin, and unidentifiable tracks had been found around the bodies, along with evidence of some kind of macabre purification rite. With their torn clothes, their private parts shaved, and their upturned hands, the bodies of those girls, almost still children, seemed to have been marked by a malign force, as old as the Earth.
Inspector Amaia Salazar always followed the same routine when she was called to a crime scene in the middle of the night. She would switch off the alarm clock so it wouldn’t disturb James in the morning, pile up her clothes and, with her cell phone balanced on top of them, go very slowly downstairs to the kitchen. She would drink a cup of milky coffee while she dressed, leave a note for her husband, and get in the car. Then she would drive, her mind blank except for the white noise that always filled her head when she woke up before dawn.
These remnants of an interrupted night of insomnia stayed with her all the way to the crime scene, even though it was over an hour’s drive from Pamplona. She took a curve in the road too sharply, and the squealing of the tires made her realize how distracted she was. After that she made herself pay attention to the highway as it wound its way upward, deep into the dense forest surrounding Elizondo. Five minutes later, she pulled over next to a police sign, where she recognized Dr. Jorge San Martín’s sports car and Judge Estébanez’s off-roader. Amaia got out, walked around to the back of her car, and fished out a pair of Wellingtons. She sat on the edge of the trunk to pull them on, while Deputy Inspector Jonan Etxaide and Inspector Montes joined her.
«It’s not looking good, chief, the victim’s a young girl.” Jonan consulted his notes. “Twelve or thirteen years old. When she didn’t arrive home by eleven last night, her parents contacted the police.»  …
«A patrol found her. The officers spotted her shoes at the side of the road as they were coming around the bend.» Jonan shone his flashlight toward the edge of the tarmac where a pair of black-patent high-heeled shoes glistened, perfectly aligned. Amaia leaned over to look at them.
«They look like they’ve been arranged like this. Has anyone touched them?» she asked. Jonan checked his notes again. The young deputy inspector’s efficiency was a godsend in cases as difficult as this one was shaping up to be.
«No, that’s how they found them, side by side and pointing toward the road.»  …
«Where’s the girl?»  …
As Amaia made her way down the incline, worn out of the rock by the river over the millennia, she could see the floodlights and police tape that marked the area where the officers were working in the distance. Judge Estébanez stood to one side, talking in a low voice with the court clerk and shooting sideways glances to where the body lay. Two photographers from the forensics team were moving around it, raining down flashes from every angle, and a technician from the Navarra Institute of Forensic Medicine was kneeling beside it, apparently taking the temperature of the liver.
Amaia was pleased to see that everyone present was respecting the entry point that the first officers on the scene had established. Even so, as always, it seemed to her that there were just too many people. It was almost absurd. It may have had something to do with her Catholic upbringing, but whenever she had to deal with a corpse, she always felt a pressing need for that sense of intimacy and devotion she experienced in a cemetery. It seemed as though this was violated by the distant and impersonal professional presence of the people moving around the body. It was the sole subject of a murderer’s work of art, but it lay there mute and silenced, its innate horror disregarded.  …
As usual, she emptied her mind of all thoughts, looked at the body lying beside the river, and murmured a brief prayer. Only then did Amaia feel ready to look at the girl’s body as the work of a murderer.“

from „The Invisible Guardian”

In the Valley of Madness

Amaia Salazar becomes head of an investigation dealing with a series of young murdered teenage girls. She solves the crime successfully, pins down the serial killer and is officially promoted: head of the homicide squad. During the next novels she investigates a special case of suicides which turn out to be tricky murders and quite a number of elaborate killings masked as natural deaths which happened over some decades although closely connected.

Obviously she’s got her hands full. Her private life belongs to her husband and her newborn son (at the end of the first novel she gets pregnant). Besides this she’s got a big family with more secrets and malice than you can imagine.

… and she and her family are involved in all these horrible killings.

I, Marlowe, think it’s interesting to summarize the essence of all the novels with regard to reality – what I just did. Beneath or above (however you like to describe it or feel about it!) there is another level, another world interacting with reality by haunting and messing the minds of all people involved. Some say it’s the evil. Some say it’s only superstition. Some say it’s madness i. e. mental illness. Anyway Amaia Salazar has to deal with it and with her very own demons.

Reality means dead bodies, means desecration of corpses, means cannibalism, means remains suggesting Satanism and sacrificial victims. There is the police with its detectives, there is the morgue with its postmortems, there are crime scene investigators, there are DNA tests, fingerprints and more. There is the prosecutor and the judge. It’s always the same, except that in this valley called Baztán in Navarre Amaia Salazar needs to unravel layers of lies and superstition, of family secrets and religious rituals to find the truth and the real evildoers.

Amaia herself was born in the valley of Baztán in 1980. Her childhood wasn’t especially happy because her mother is mentally ill (let’s say it this way!) and scared the hell out of her daughter. Also Amaia learnt all about this special universe of witches and demons and whoever strolls through the woods, lives in caves … all the incantations to keep away witches … all the small rituals to appease these creatures.

This is the legacy of the valley and all people tell the stories and myths of the past, if miracle, if misadventure again and again – especially to their children. Somewhat simplified there are good creatures and evil creatures, but you can be sure that the evil ones outnumber the good ones. There are spots a woman should approach if she wants to get pregnant. There are rituals if somebody died in a house … There are wells that may cure … whatever. I think you got it.

Amaia left the valley to train as a policewoman and a detective. She even enjoyed a FBI training about profiling. Now as an inspectora she lives in Pamplona. She never planned to return to the valley although her family lives there. So far, so good. Then the serial killing of teenage girls starts, Amaia still haunted by nightmares about events from her childhood becomes head of investigation and is forced to return. She isn’t happy, but she rolls up her sleeves and gets to work.

Soon she notices that there is more than a psycho with a weakness for pretty girls and his very own ideas about how to present the corpses. She learns that the killings didn’t start just now, but obviously years ago. Unfortunately Amaia is not only busy with investigating the killings because there is her vast family, especially her hostile and argumentative sisters. Without spoiling anything I may unveil that the killer is part of Amaia’s family.

The serial killings … there is a murder case that doesn’t quite fit. Amaia unravels a copycat … and here starts the next killing spree: another series, another psycho, another obsession. When Amaia makes a deep dive into this new mess she rather soon discovers more evildoing … more murders over decades.

… and she also unravels the role of her mother – not an innocent woman at all.

When we stay in reality there are the corpses and the killers, the cases. When investigating the cases Amaia is confronted with a network of lies and interconnections on a more spiritual level. In the valley there are old religious beliefs and rituals interwoven with Catholicism. Some people believe in the demons and the dark forces of the past before Christianity emerged. They organize themselves in cults and redefine old sacrifice processes – and they prefer little girls and baby girls on their altar. All is very secretive, but the collateral damages lie in the morgue.

What is it? Insanity, obsession, conspiracy – most of the evildoers are respected members of the society on influential positions. They join the special cult Amaia investigates for their own benefit dreaming of wealth and success which is rather concrete because all the members support each other. This network of powerful people manages to stay clear of any suspicions for decades.

Amaia almost loses her baby boy and risks her marriage when she tries to stop all the killing. She isn’t unresponsive to a very charming man … At the end she wins and a long story ends, however, the myths survive and will be passed on to the next generation.