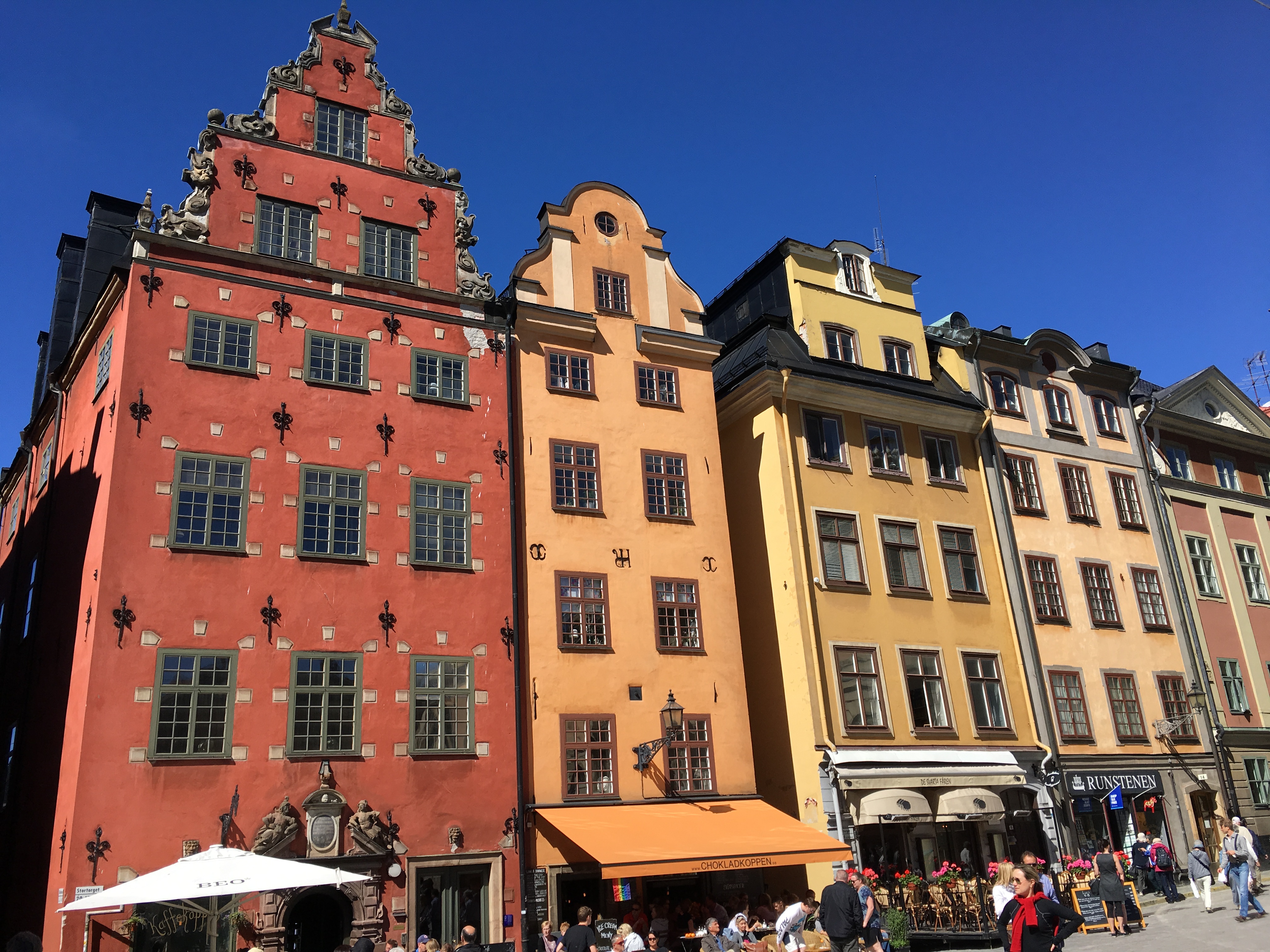 „Journalist Mikael Blomkvist of the magazine Millennium was sentenced this morning to ninety days in gaol for aggravated libel of industrialist Hans-Erik Wennerström. In an article earlier this year that drew attention to the so-colled Minos affair, Blomkvist claimed that Wennerström had used state funds intended for industrial investment in Poland for arms deals. Blomkvist was also sentenced to pay 150,000 SEK in damages. In a statement, Wennerström’s lawyer Bertil Camnermarker said that his client was satisfied with the judgement. It was an exceptionally outrageous case of libel, he said.”

from „The Girl with the Dragon Tattoo”

„Salander landed at Stockholm’s Arlanda Airport at noon. In addition to the flying time she had spent nine hours at Grantley Adams Airport on Barbados. …  By the time she landed in Gatwick in London, she had missed her connecting flight to Sweden and had to wait overnight before she could be rebooked.
Salander felt like a bag of bananas that had lain too long in the sun. All she had with her was a carry-on bag containing her PowerBook, Dimensions in Mathematics, and a change of clothes. She passed unchecked through the green gate at customs. When she got outside to the airport shuttle buses she was welcomed by a downpour of freezing sleet.
She hesitated. All her life she had had to choose the cheapest option, and she was not yet used to the idea that she had more than three billion kronor, which she had stolen by means of an internet coup combined with good, old-fashioned fraud. After a few moments getting cold and wet, she said to hell with the rule book and waved for a taxi.”

from „The Girl Who Played with Fire”

The It-Girl of Crime

Imagine a girl – fit and bright, but… unfortunately Lisbeth Salander was born into a lower social class. Her mother relied on the wrong partner, a brutal criminal nevertheless under protection of the law. He abused his daughter who fought back – and so she ended up in a mental institution only to suffer from more abuse.

For the state and its representatives she is unfit for life and in need of a legal guardian. For several years her legal guardian aware of her outstanding abilities supports Lisbeth – and Lisbeth is able to develop herself into an extraordinary investigator specialized in scrutiny of individuals by help of data base and Internet analysis. Naturally she is a nerd and a first class hacker, she’s got tattoos and connections in the happy hacker’s world and sticks at nothing.

Then suddenly… luck is capricious… In short: her past suddenly resurrects.

Carl Mikael Blomkvist (aka Kalle Blomkvist – Is there anybody out there who doesn’t know Astrid Lindgren’s junior detective?) is the classic investigative journalist always looking for a good story, always aware of fraud and corruption. One of his stories suddenly backfires and sends him to prison – and his reputation as a true and honest journalist is badly damaged.

I, Marlowe, like to acknowledge that we are only talking about the three original novels – the original Millennium Trilogy. Stieg Larsson died unfortunately rather young; there are rumors that he worked on a fourth novel, however, his beneficiaries have locked this approach. So far, so good. Nevertheless there are follow-ups (approved by the beneficiaries)… As always we are not dealing with such copycat novels.

There are three novels, but actually it’s a continuous epic.

When Mikael is sentenced because of his revelations about an entrepreneur his career seems broken. A mighty and old tycoon, Henrik Vanger, gets in touch with him: his great-niece Harriet vanished into thin air on an isolated island about forty years ago. Vanger believes that a member of his own family killed her and got away with murder.

Mikael shall start an investigation from scratch. At his side is Lisbeth working for a top-class security company with connections to Vanger. (When coming across Lisbeth with her black shredded outfits, her spiky hair, her tattoos, her body piercings etc. you wouldn’t imagine… ok – she’s always in the background!)

Why should Mikael accept this strange task? Vanger lures him by promising to deliver discrediting information about the entrepreneur who is responsible for Mikael’s downfall. So both of them start to snoop around this sort of „closed room“ mystery.

In short: they solve the mystery and they uncover a lot more; a mass murderer is up to no good since decades. Mikael learns how easy you may become a target for a mass murderer and Lisbeth saves his life literally last-minute. Apart from that his reputation is restored (also with help of Lisbeth) – and Lisbeth becomes rich.

Mikael’s next investigation deals with human trafficking… and Lisbeth gets involved and faces bad guys of her past. When her former legal guardian fell ill and was replaced by another one who pressed sex for money Lisbeth fought back and closed this case for herself. Unfortunately she didn’t expect more intrigues. Her father re-emerges under full protection of state security to take revenge, to hurt, to kill – being part of the human trafficking business Mikael deals with.

It is a long story with many twists and surprising findings. Lisbeth has to fight for her life and her freedom when all her enemies strike back and want her behind bars for the rest of her life. Of course Mikael interferes in this jungle of police hierarchy, state security, politics, social welfare, mental institutions who all have their skeletons in their closets because of disastrous prioritising in the past. A scandal of enormous extent shattering Sweden’s administration and society is unearthed – a field day for an investigative journalist.

All this epic is presented in a clear, tight writing. Stieg Larsson needs more than 1500 pages (English edition) to deliver his story – and each page is worth reading. Not only the story is gripping, but also his narrative style is intriguing. Maybe it’s because Stieg Larsson is originally a journalist… Focussing runs in his blood.

When starting with the Millennium Trilogy I was tempted at first to concentrate only on Lisbeth because she is the prototype of a new player in crime literature. However, Lisbeth without Mikael wouldn’t work. Lisbeth is not self-sufficient when contemplating the masterpiece. Although Lisbeth is tough and may care for her life and success she would have disappeared in the quagmires of social welfare administration and law enforcement agencies due to the finely spun intrigue of all the people who made wrong decisions on and off mainly to protect themselves.

Mikael is somewhat of her knight in shining armor – otherwise without Lisbeth’s knowhow of the Internet… and her ability to pervert „facts“ Mikael would never have been able to redeem himself and save his career.

So it’s about the two of them!

So – Lisbeth became a prototype. For what? She is a girl and a woman, but not like the typical female character you expect. She doesn’t care about her beauty or her outfits, she doesn’t care about any career. Her abilities concentrate on fields you mainly relate to men: computer science, Internet, hacking… (Normally – in crime series – there is a young guy scurrying around, spending almost 24/7 in front of his notebook resp. smart phone being able to produce complex data analysis within minutes, but unfit for any social life.) Lisbeth has got brains and she is able to use them – as well as she is able to enforce anything she wants should it be necessary with brute force. Nevertheless she’s developed rigid ethics for herself and social relations. So listen: the Internet and recklessness are no longer a male domain.

…at the end:
All novels (3!) became Swedish movies – and the movies are brilliant and live up to the books. Hollywood, of course, wanted to participate: there is another brilliant movie featuring the first novel with Daniel Craig. Don’t miss them for a long movie night!