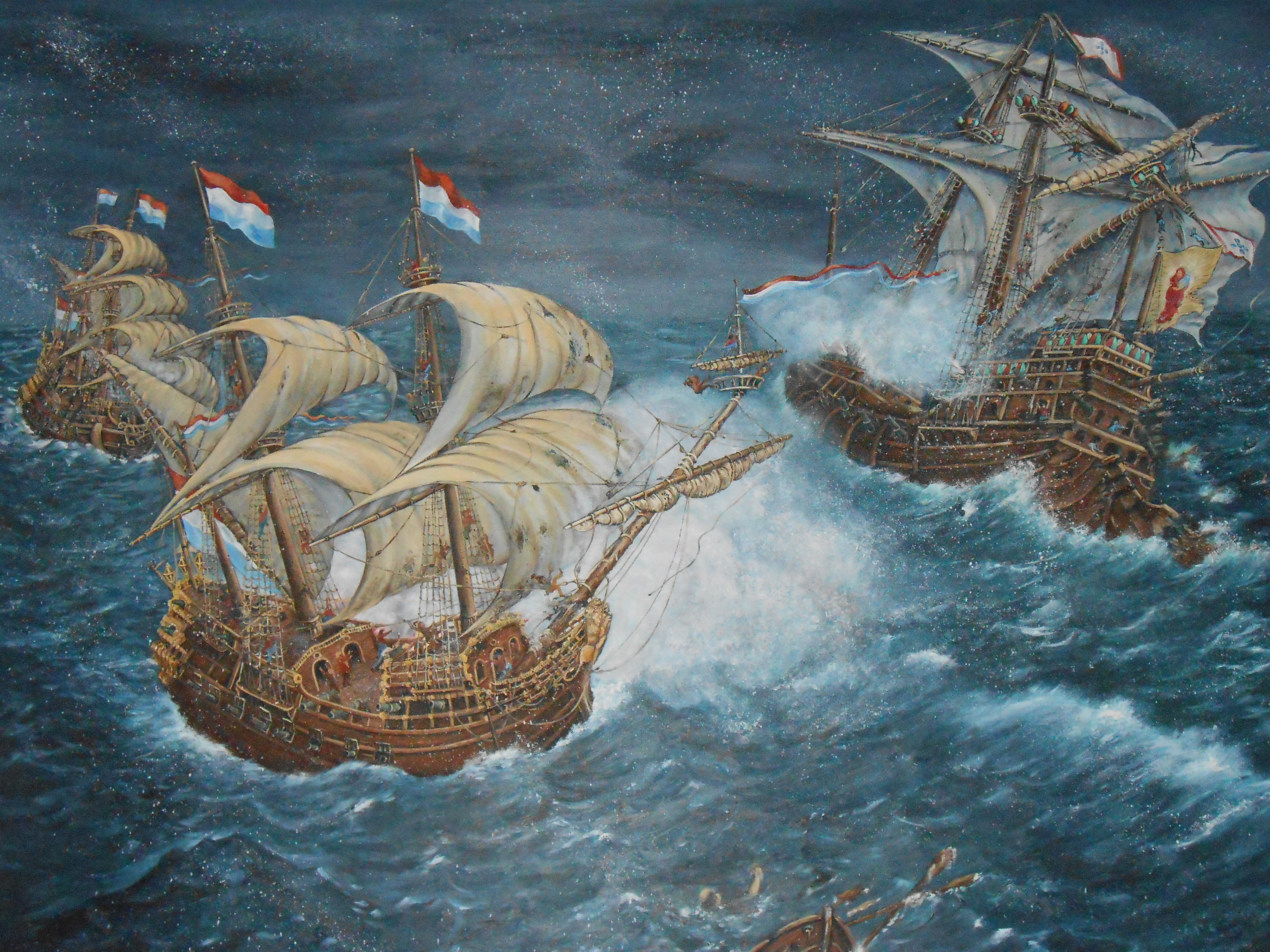 Our Past and Our Present

„The streets that led from Wesley Peterson’s newly acquired house, perched above the town, down to the crazy huddle of buildings that clung to the riverbank were hill-steep, narrow and winding; not built for cars. Wesley felt it would be easier to walk to his new place of work. He told himself that this was a good thing: he would become fit. In London he had never walked; had never really had the time. Downhill was easy; the return journey up those cobbled streets would be the real test of endurance.
It wasn’t long before he reached the heart of the town.
…
To his left, between two shops of Victorian vintage, was a gap, like a missing tooth, filled by a wire fence. In London he would have passed by without a second look, but here in Tradmouth things were different. He stopped and stared at the exposed site: the small mounds of brickwork; the intriguing holes rooted here and there; the skeletal layout of a building revealing itself on the brown earth. A dig was in progress, unmistakable. Wesley was on familiar territory.
Three dusty figures behind the wire screen bent over the ground with trowels, brushes and concentration. One of them he recognized.
‚Neil!‘
A young man in torn muddy jeans and with a mess of brown hair looked up. When he saw Wesley he grinned.
‚Wes! Good God, man, what are you doing here? You look a bit smart. What are you selling?‘
…
Sergeant Bob Naseby looked longingly at the steaming mug of tea behind the counter, hidden discreetly from the public view. … But no sooner had the station door swung shut, than it opened again and a tall, smartly dressed young man entered and walked confidently up to the counter. Bob Naseby hadn’t seen him before; he would have remembered. The dark brown face was pleasant and the eyes intelligent. If Bob had to hazard a guess he’d put the newcomer down as a new doctor at the local hospital.
‚Morning, Sir. Can I help you?‘
‚Detective Sergeant Peterson. I’ve been told to report to Detective Inspector Heffernan.’

from: “The Merchant’s House”

What do we learn right at the start of the first book?
Wesley moved from London to Tradmouth and had bought a new house. He stumbles across a dig, feels at home at this archaeological site because of his background in archaeology. As it happens he meets his old pal Neil, also an archaeologist and in charge of the dig. Wesley – a neat, handsome and smart guy -, however, starts working at Tradmouth’s police station in CID after his transfer from London.

…and so we meet all the ingredients of the series!

Has it ever crossed your mind that fashion may change, general level of education and knowledge may change, political order may change, caring for law and order may change, faith may change… but that people stay as they are, behave as they’ve been told and learnt, relying on ancient interest motives as if inherited by their blood? Time flies, but people live the same way as ever. (Concerning crime: think of Cain and Abel in the Bible… Judith’s murder of Holofernes… of Samson and Delilah’s treason… but let’s stay here and now!)

The series introduces us to 2 people: it is Wesley Peterson as the cop and it is Dr. Neil Watson as the archaelogist. Both met at university when studying archaeology and started respective careers – however, Wesley decided to join the police force shortly after. Each book of the series presents 2 stories: there is crime in and somewhere around Tradmouth (Wesley dealing with murders, abductions, missing persons, hit-and-run accidents…) and there is crime in the past with its spare forensic relics revealed by an archaeological dig (Neil’s homeland). In the books there are additional small sections giving chronologically insight in ancient diaries and letters, parish registers and directives of landed gentry, court decisions and legal reporting and whatever there is available in historical archives.

…and you may already have guessed it: both crimes have always somewhat in common!

Concerning the past we are digging into ancient Viking attacks and looting, the infamous destruction of the monasteries by Henri VIII, the times of the plague, the human fallout of the Armada, Victorian hypocrisy, D-Day trainings and over and over along all the centuries ship wrecking, ship plundering, foul ship trading… because Tradmouth lies at the coast and has always had a prospering harbor.

Today there is quite a lot of minor crime like burglary, tourist scams, stolen cars…, however, Wesley and his colleagues are also responsible for any serious crime. Be sure there are quite a lot of suspicious deaths, manslaughters, murders, abductions, child molestations, sophisticated fraud projects – all of them finally resulting in collateral damages i. e. more dead people.

After managing to untangle all the mess – if present, if past – basic motives like envy and grudge, greed and revenge, personal gain, the will to survive and the strive for prosperity always pave the way to crime. All repeats itself: people did not become better people during the centuries.

Back to Wesley: after his university studies Wesley became a police officer in London in the unit for art theft, art forgery, art smuggling… Then he and his wife decided to move to the countryside for a better quieter life resulting in the transfer to Tradmouth. Wesley starts over at Tradmouth at the Southern coast of England as Detective Sergeant. Soon his boss Detective Inspector Gerry Heffernan is promoted to Detective Chief Inspector and Wesley finds himself as Detective Inspector.

Wesley loves his job although sometimes – I think – he ponders about his lost chances in archaeology especially when hanging out with Neil. He is committed and works long hours. His wife Pam, a teacher, is not so happy with his job especially after the birth of their children, a boy and a girl. It is back-breaking for Pam to care for the household, the toddler and the baby, her part-time job – there is a crisis looming… During the years, however, the children grow up into teenagers bringing home new kinds of trouble – as any other teenagers world-wide. Pam survives a cancer attack leading Wesley to more engagement at home and with his family.

Wesley’s parents are both doctors in London; his father is even a Fellow of the Royal College of Surgeons. His sister is also a doctor and married to the local vicar. Wesley never had a feeling for medical science; he dislikes to be forced to attend any postmortems. Wesley and Pam are by far not so well-off as the rest of the family. Pam’s mother is – my sketch – some crossing of an elderly hippie, a man-eating lady, a wine-loving party animal…

It’s time for me, Marlowe, now to mention that Pam’s mother introduced Moriarty to Wesley’s household – much to the delight of her grandchildren. Moriarty is a fine cat ruling the household in the background and bringing peace to everybody around. Wesley and Pam are dreaming about a bright future every now and then when their children are grown-ups, left home and money is not so stretched to meet ends.

A short remark why I deal at length with the family background: in the books the evolution of Wesley’s family, Neil’s private life as well as the private lifes of Wesley’s colleagues are present and form part of the stories. When reading the books I was not only keen to get to know the solving of the whodunit, but also how all characters move on with their lifes.

Neil – by the way – once had a crush on Pam, but Pam preferred Wesley. It did not harm the friendship of both men in any way. Neil works as an archaeologist in the field for the Country Archaeological Unit and is always busy digging, cleaning, assigning, systemizing – he has got only very few spare time e. g. to be concerned with women. Nevertheless he has a girlfriend sometimes… He is passionate about his work and likes nothing more than unravel the secrets of the past.

Wesley’s colleagues at police are as committed and passionate, as bored with their daily business, as keen to earn some money alongside, as whatever as any other people working in administration. In short: they are no saints!

Gerry Heffernan is Wesley’s boss and he likes Wesley. Gerry is correct and strict concerning any misconduct, laziness, lies. Wesley is always far from this edge of the job, so both get along just fine. Gerry is a widower with 2 children at university sometimes full of ideas how to make money on the brink of reasonableness. He suddenly learns that he has got another child also grown-up now. Private life is sometimes demanding for him.

…and there is Rachel Tracey (by now Detective Sergeant reporting to Wesley!). Rachel has a crush on Wesley and Wesley also has some sort of crush on Rachel, however, Wesley has got a wife and 2 children and his wife struggles with their home and fights cancer and… Wesley becomes a devoted husband – again. Rachel is now engaged and postpones her marriage twice – when I remember it correctly…
Well, maybe there might be something coming up in near future!

Why do I like the books?
The mix of a current case and a crime in the past is simply intriguing. During the centuries the nature of men did not change – obviously!

…and by the way: Wesley is black. His parents immigrated from Trinidad and made careers in health care becoming (very!) successful doctors. Wesley got a fine education and is part of an ethnic minority which surely may pay off in today’s police organization! (There are some hints here and there…)