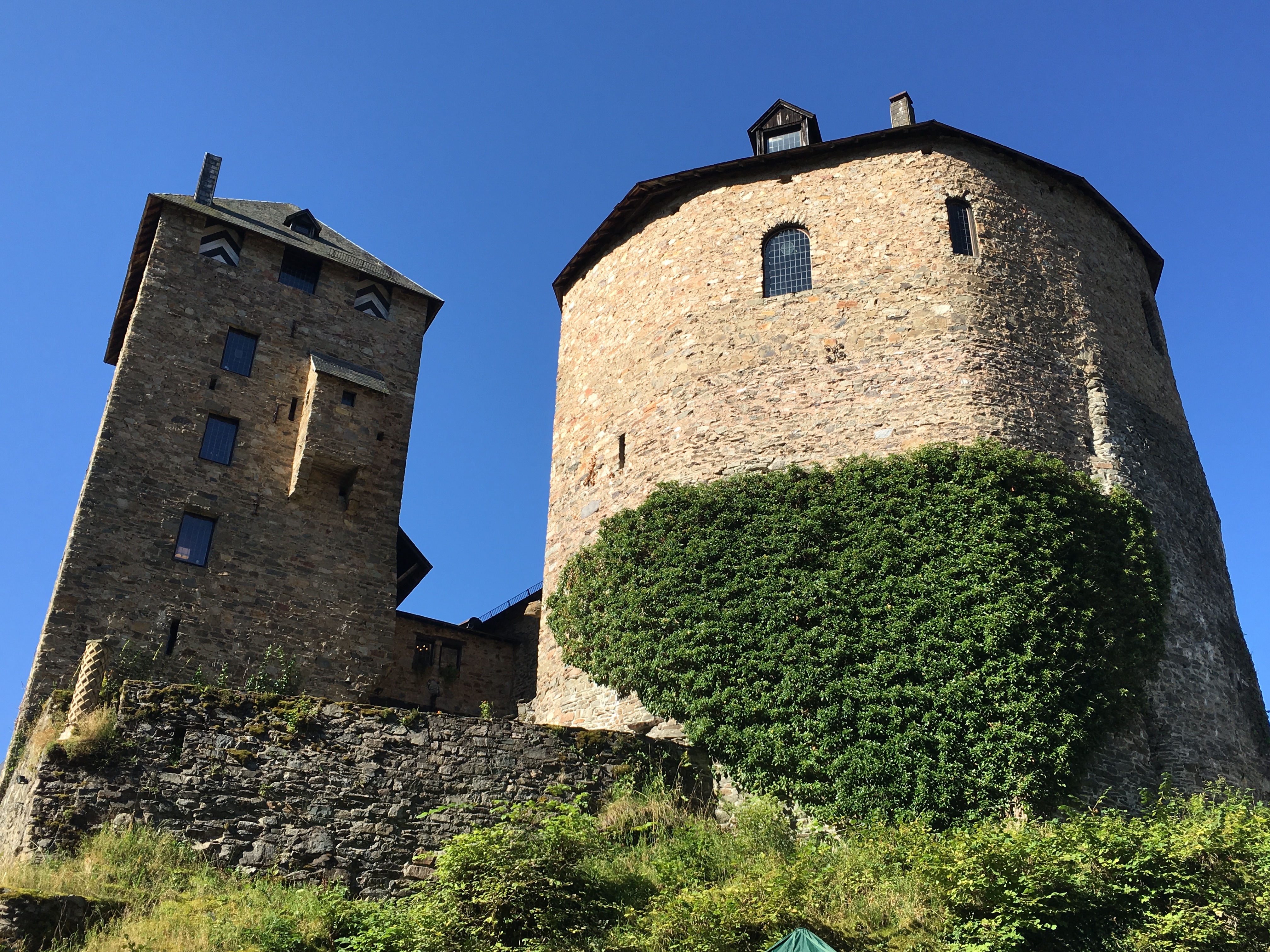 „He was still young, and evidently fit enough to be dapper and brisk in his movements, but as he relaxed he was sufficiently concerned about his love of food to tap his waist, gingerly probing for any sign of plumpness, always a threat in this springtime period between the end of the rugby season and the start of serious hunting.   …   Benoît Courrèges, Chief of Police for the small Commune of St. Denis and its 2,900 souls, and universally known as Bruno, was always prepared for every eventuality.
Or almost always. He wore no heavy belt with its attachments of holster and pistol, handcuffs and flashlight, keys and notebook, and all the other burdens that generally weigh down every policeman in France. There would doubtless be a pair of ancient handcuffs somewhere in the jumble of his van, but Bruno had long forgotten where he had put the key. He did have a flashlight, and constantly reminded himself that one of these days he ought to buy some new batteries. The van’s glove compartment held a notebook and some pens, but the notebook was currently full of various recipes, the minutes of the last tennis club meeting (which he had yet to type up on the temperamental old office computer that he distrusted) and a list of the names and phone numbers of the minimes, the young boys who had signed up for his rugby training class.”

from: „Death in the Dordogne“

When the series starts Bruno – as you already know: everybody calls him Bruno – lives since 8 years in St. Denis earning his living as the local police force (no team!). He is in his mid-30s. As an almost orphan (father unknown – mother left him alone when still a baby) without any extraordinary education he joined the army when he was only 16. After his main mission in the Bosnian battlefield (war from 1992-1995) where he was wounded he came back to France, left the army and became chief of police in St. Denis – with help of a fellow soldier who happened to be the son of the mayor. In his new role in St. Denis his training and education as a soldier is always present helping him to deal with everyday’s miseries.

Bruno became a trustworthy pillar of St. Denis. He cares about St. Denis and everybody in St. Denis – and everybody in St. Denis cares about him. With the help of the mayor he acquired an old cottage with a big garden, renovated the house with help of many friends from St. Denis, cultivated the garden… Now he lives happily in the outskirts of St. Denis with his dog and some hens and some geese. Somewhat later he becomes the proud owner of a horse and learns how to ride. He is active in any local club – if tennis, if rugby, if whatever… He likes to garden and to cook (later more).

I, Marlowe, like to mention at this point – earnestly – that Bruno seems to be a really nice guy, but he belongs to the dog people: I prefer cat people … and by the way I cannot remember that anytime any cat is mentioned in the series, let alone playing a major role.

What do you think so far about living in St. Denis?

Maybe you’ve already got it: cronyism and cliquism rule the world in St. Denis. You may look on the bright side like “everybody cares about everybody” – this is the way it is in St. Denis. It means that Bruno got a home and a cottage and friends.

The mayor who worked in Paris in governmental administration after having attended one of the famous French administration schools and having made the anticipated successful career in high political circles, has his information channels and his powerful friends to manage all the problems that may occur in St. Denis. He needs someone like Bruno who will just execute without ever forgetting who helped him.

Together with the mayor there are some more old men ruling the village – well: everything seems fine so far. Everybody wants to do the best even when breaking some laws – if only slightly – especially laws induced by EU in Brussels. (There is some fundamental grudge about EU food production regulation vs. traditional food production in the very heart of culinary France.)

Bruno fits in. From his military background he knows the chain of command and he transfers his experience to his job as chief of police. He isn’t revolutionary – no: he is now a soldier for St. Denis.

Since 8 years Bruno is fine with his job – then there is a brutal killing and suddenly the political right wing in France jumps at the chance to induce riots. It’s French people against immigrants from North Africa especially the former French colonies. Bruno finds himself suddenly in a mad uproar and is busy to his ears to manage peace while tracking down the murderer(s). It comes out that the reason for the murder has to be searched in the past i. e. WW2 and the French resistance.

From this point in Bruno’s life St. Denis doesn’t seem to be the quiet bucolic village of the last 8 years. Of course there are road accidents, quarreling neighbours, naughty schoolboys playing their tricks, shoplifting, burglaries etc. However, every now and then there are murders… and Bruno is busy to solve all the mysteries – Bruno even gets more or less severely hurt several times.

Bruno is only a lonely cop in the village although helped by all the straight citizens and the mayor and his friends. Of course there is also the police nationale and the gendarmerie, however, with all the argy-bargy of concurrent police forces. Bruno is able to deal with everybody – he’s got his friends at the police nationale as well as at the gendarmerie. He is strict, has a lot of organsational abilities and staying power. In the end it’s always him to solve the mystery!

In addition there is this connection to some special forces in Paris organizationally placed somewhere around the ministry of the interior and the ministry of defense, the elusive clubs of national intelligence services, counter intelligence etc. (It always remains in the dark where this center of power actually is at home.) The brigadier – on top of this unit – seems almighty always dealing with top crime, top counter-terrorism, top political affairs… He has his very own interests, but is always eager to help Bruno and his mayor. Well. It seems that living in the sticks in France doesn’t mean that there is no dangerous crime, international crime, terrorism, organized crime etc.

Let’s summarize: There are always 3 players (police nationale, gendarmes, brigadier (including spies, military, security)) in the field together with Bruno!

What happens during the next about 8 – 10 years after Bruno experiences his first murder case?

You get it? The past, especially France’s past, is eminent for Bruno’s daily business. We are talking not only about WW2 and the resistance, of Algeria and Indochina, but also about rebellious 1968 and its fallout, about 911 and its fallout, about French Foreign Legion and mercenaries, about intelligence all over the world.

It’s the ugly face of today’s world mixing up even the idyllic French countryside. However, Bruno lives in this great French countryside with a long heritage of food and wine and enjoys it. Lots of cheeses, lots of patés, self-fatted pigs and ducks, self-butchered pigs and ducks… all of it is traditional and rather at the edge of modern EU regulations. Bruno is always busy to protect his flock from external inspections in order to enjoy the exquisite delicacies.

Bruno is an excellent cook – one of these formidable people who can cook, just cook. He lives happily with his dog in his cottage, cares for his vegetable garden, feeds his hens, likes to cook… grabs some eggs, some vegetables, some home-cured meat… It is over and over surprising how fast he can prepare an exquisite dinner while his friends bring along the dessert and the wine. (In the books lots of these feasts are described in detail: you start having fun in cooking when reading – and he never is concerned with dishwashing!)

Bruno has a lot of friends, but he lives alone. That’s his main problem. He dreams of a wife and children while renovating his cottage. It isn’t because there aren’t any beautiful women interested in Bruno and spending a night (or more) together. (Bruno is labelled the most eligible bachelor by lots of mothers with daughters in St. Denis.)

There is Isabelle a young career women in police nationale, however, she chooses her career in Paris over living in St. Denis. There is the mad English woman who raises Bruno’s passion – not only – for horses …and there are far more! Always his women are intelligent, educated and successful in their respective careers: not the material for creating a family home and caring for children. (Honestly, I don’t know if there will be a solution sometime in near future…) It is becoming quite a burden for Bruno and I think he’s getting more and more unhappy because his desire for kids is far from fulfilling.

When looking at the life in St. Denis, in the Périgord, it seems like living like God in France. All people are happy. Even the poor people are cared for. All people like great food and great wines and they have plenty of it. There is an overall harmony. Even the tourists and the ex-pats blend in.

Whenever reading one of the books you’ll be starting dreaming of a long holiday in sunny South-Western France or even to retire there in some years. Crime is the icing on the cake caring for the thrill.

I only mention the main novels with Bruno. There is some more – stories, a cookbook…
Until now – as far as I know – there aren’t any movies or TV series about Bruno.